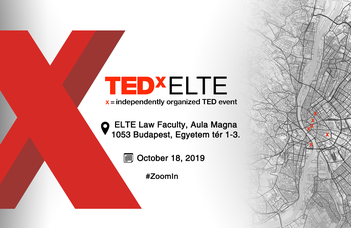 TEDxELTE 2019 is proud to presents its speakers! Get to know them by clicking on their names in the dropdown menu—and learn what they are to deliver. Zoom in with us! :)

Chair and co-founder of the Women in Energy Association, owner of White Paper Consulting
Andrea had worked in television for 15 years before kick-starting a new career path in the energy sector. After being the Communication Director of MOL and of GDF Suez (ENGIE), she co-founded Women in Energy, a non-profit association promoting women leaders in energy in CEE countries. Her talk will mainly concern the energy sector and how we can benefit from gender equality in leadership.

The car industry has realized 50 years ago that the mass of people doesn’t have only one need, everyone has their own preferences, desires, and habits, which the industry has to give a flexible response to. In a global industry such as education, however, there has not been a comprehensive paradigm shift, in which mass education is replaced by learning pathways tailored to the individual needs, skills, and goals. Ken Robinson, education expert says that humanity’s second biggest problem after climate change is the global crisis of education. The paradigm shift has probably never been more necessary and urgent than it is now.

Author of Mások Álma (Dreams of Others)
Mirjam lived and worked in New York City for 7 years—she is recepient of a Fulbright grant, has an M.S. in Journalism from Columbia University and an M.A. with a special degree in Business and Economic Reporting from New York University. She worked as a journalist for Reuters, the largest multimedia news agency in the world. She currently lives in Budapest and in Brazil with her husband and two children. She will explore the role our roots play in defining who we are and the directions we take in our search for home and happiness.

CTO of Enjoy Robotics
Enjoy Budapest Café is the only place in Budapest where robots serve the guests. At the café, visitors can meet a variety of robots who they can talk to and play games with. The café’s main aim is to bring robots and AI closer to people and to participate in humanoid robot development projects side by side with universities. Gergely will talk about the future of robots and also bring them on stage.

Chief Happiness Officer at Amigos for Children
Currently I am pursuing the last year of my Master’s Degree in Finance at Corvinus University of Budapest and in parallel with this I also studied International Management in the CEMS program. I joined the organization Amigos for Children 2 years ago as a volunteer – or as we call it an “Amigo” – a charity with the aim to accelerate the recovery of chronically ill children through the joy of learning. I just started working for this association as the Chief Happiness Officer, who is responsible for sustaining and improving the core activity, the hospital visits as well as the Amigos-community. I would like to bring the audience closer to our amazing world and to show our strong motivation even in the tough moments.

Head Youth Delegate of the EU to G7, Founder of V4SDG, Sustainability Leader, 1st Youth Delegate of Hungary to the UN
András Volom is a youth and sustainability advocate born and raised in Budapest. During his university studies, he successfully lobbied the Hungarian Government to start sending youth representatives to the United Nations, becoming the first UN Youth Delegate of his country. Subsequently, he held similar positions at the Council of Europe and the Group of 7, speaking up for the interests of future generations. Currently, he leads V4SDG - Visegrad for Sustainability, a non-profit organisation strengthening leadership and partnership for sustainable development in the Visegrad Group, an issue that is crucial for all living in the 21st century.
In his talk, András will discuss whether young people – through protest and representation – can make a difference, and if not, what is missing? He has been in the midst of international youth advocacy since 2012, when he joined the team of the 2nd Summer Youth Olympics as a junior consultant. In laying his case, he will draw on his experience with policy, interactions with high-level decision makers, as well as his academic background in International Relations, Identity and Sustainability. Young people are pushing against global challenges that may decide the fate of humanity as we know it. It is key that they figure out how to succeed.

Faculty of Law, Criminology MA, special education teacher at a reform school
Anna has just started working at a reform school. The choice to dedicate her life to youth delinquency was induced by being attacked and seeing the attackers on trial. She aims to explore in her speech how we can re-integrate young criminals, emphasizing that attitude matters the most in every relation.

Faculty of Law, Department of Constitutional Law, Law student
In the Big Data Universe, our perception of privacy has changed in a negative way, which poses a real threat to human rights and democracy. Zsanett raises two questions: 1) WHY do we need new safeguards that are able to protect our privacy? and 2) HOW can we do that? Even thought the legal protection of yesterday is not suited for the problems of tomorrow, spreading the decentralized network of blockchain could ensure privacy and motivate us, citizens, to shape democracy 2.0.

Faculty of Humanities, English Studies student
AHA! moments. Guiding, Observing. Learning from others. These values were important milestones in Lilla's personal development, as she upgraded from the school's drama group to experimental theatre, working with people from various, often underprivileged backgrounds. Realizing how much the lessons and methods learnt from playback help her navigate in a competitive academic environment, she would like to share her story to spark discussion about the importance of the mental health of university students.

Faculty of Humanities, English Language and Literature student and Collection Intern at Eaton Enterprises
Teodóra was assaulted sexually when she was a child. With the help of her psychologist she is in the process of healing. She often remarks how people, men and women equally, tend to blame the victim. That is the reason, why she speaks out against assault: she wants to help those with similar experiences to be able to talk about what happened to them, so they can start healing and shape public discourse.